lang=”el”>Κάρπαθος, Greek pronunciation: [ˈkarpaθos]) is the second largest of the Greek Dodecanese islands, in the southeastern Aegean Sea. Together with the neighboring smaller Saria Island it forms the municipality of Karpathos, which is part of the Karpathos regional unit. Because of its remote location, Karpathos has preserved many peculiarities of dress, customs and dialect, the last resembling those of Crete and Cyprus. The island has also been called Carpathus in Latin, Scarpanto in Italian and Kerpe in Turkish.

The island is located about 47 kilometres (29 miles) southwest of Rhodes, in the part of the Mediterranean which is called the Carpathian Sea (Latin: Carpathium Mare). The Sea of Crete, a sub-basin of the Mediterranean Sea, has its eastern limit defined by the island of Karpathos.[2] Karpathos’ highest point is Mt. Lastos, at 1,215 metres (3,986 ft). Karpathos comprises 10 villages. Pigadia (official name Κάρπαθος), the capital and main port of the island, is located in the southeast of the island. The capital is surrounded by the villages of Menetes, Arkasa, Aperi, Volada, Othos, and Pyles. In the north Mesochori, Spoa and Olympos. There are two ports, in Karpathos and in the north of the island next to Olympos named Diafani.

The island Saria was once united with Karpathos, but an earthquake divided them. Saria preserves many important antiquities. 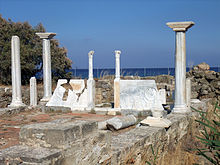 Remains of the early Christian basilica of St Fotini, Pigadia

The island of Karpathos was in both ancient and medieval times closely connected with Rhodes. Its current name is mentioned, with a slight shift of one letter, in Homer‘s Iliad as Krapathos (οἳ δ’ ἄρα Νίσυρόν τ’ εἶχον Κράπαθόν τε Κάσον τε). Apollonius of Rhodes, in his epic Argonautica, made it a port of call for the Argonauts travelling between Libya and Crete (Κάρπαθος: ἔνθεν δ’ οἵγε περαιώσεσθαι ἔμελλον).[8] The island is also mentioned by Virgil, Pliny the Elder, and Strabo.[citation needed]

The Karpathians sided with Sparta in the Peloponnesian War in 431 BCE and lost their independence to Rhodes in 400 BCE. In 42 BCE, the island fell to Rome. After the division of the Roman Empire in 395 CE, the island became part of the Eastern Roman (Byzantine) Empire.[citation needed]

Of its Christian bishops, the names are known of Olympius, who was a supporter of Nestorius, Zoticus (in 518), Mennas (in 553), Ioannes, Leo (in 787), and Philippus (in 879). In the 14th century, the island was a see of the Latin Church, four of whose bishops bore the name Nicolaus.[9][10] No longer a residential bishopric, Karpathos (in Latin Carpathus) is today listed by the Catholic Church as an archiepiscopal titular see.[11]

In 1304, Karpathos was given as fief to the Genoese corsairs Andrea and Lodovico Moresco, but in 1306 it fell to Andrea Cornaro, a member of the Venetian Cornaro family.[12] The Cornaro controlled Karpathos until 1538, when it passed into the possession of the Ottoman Turks.[12]

During the Greek War of Independence from 1821 to 1822, the island rebelled, but afterwards it fell again under the Ottoman rule.[12] In 1835, Sultan Mahmud II conceded to the island the privilege of the Maktu tax system; that is, the tax was calculated as an annual lump sum, and not on an household basis.[12] The Ottoman rule ended on 12 May 1912, when the Italians occupied the island, together with the whole Dodecanese, during the Italo-Turkish War of 1911-12. On that day, sailors from the Regia Marina ship Vittorio Emanuele and the destroyer Alpino landed in Karpathos.[12] With the Treaty of Lausanne of 1923, Karpathos joined the other islands of the Dodecanese in the Italian possession of the Italian Aegean Islands,[12] and was ceded by Italy to Greece with the Paris Peace Treaties of 1947. The island formally joined the Kingdom of Greece on 7 March 1948, together with the other Dodecanese islands.[citation needed]

In the late 1940s and 1950s, due to the economic problems after World War II, a number of Karpathians emigrated to the U.S. eastern seaboard cities;. Karpathos today has a significant Greek-American constituency who have returned to their island and invested heavily. Inhabitants of the mountains to the north are more traditional.